Tapp Hancock teaches a math lesson in her Wayside School classroom. Tapp is one of four teachers statewide selected as a finalist for the 2006 Presidential Award for Excellence in Math and Science.  Forget rote memorization.  Instead, think boogie boards, frogs, stories and, most importantly, the traditional classroom sin of finger counting.  "I got tired of teaching third grade and seeing half the kids not grasp multiplication facts," said Wayside School second-grade teacher Tapp Hancock.  "So I started to look at the patterns to see how it works."  Now, 10 years after first inventing her program, Han-5 Mathematics, Hancock is one of four state finalists up for the 2006 Presidential Awards for Excellence in Mathematics and Science Teaching.  This is her second time as a finalist. About 108 teachers nationwide will be chosen from among the finalists to receive the national award in 2007.  Winners will go to Washington, D.C., and receive citations from the President and $10,000.
"The system Tapp developed teaches students division and multiplication using their fingers," said State Superintendent of Public Instruction Jack O'Connell in a news release Thursday.  "This method is innovative and empowers students to solve any math problem."  It's a method Hancock said she patented in 2000.  She uses it to teach her second-graders multiplication, division, fractions and algebra. Students first learn how multiples work through a series of activities and stories. Tapp shows them how to use their hands to multiply, divide and do fractions and  algebra. Tapp spent Thursday morning teaching her students how to work with multiples of four. Students held their hands out, with the two middle fingers folded down, as Tapp gave them multiplication and then division problems. Then it was time to move on to an even larger challenge -- teaching second-graders algebra. "We know how to divide. Now we can do algebra," Hancock said confidently. "What's a-leg-a-bra?" one student asked. Hancock drew the equation "4x = 28" on her projector. She asked students what x was. Students counted on one hand. Within seconds, all 18 students' hands flew into the air.  "I see all hands up in the air," Hancock said, smiling. "On the bell." Hancock tapped a small tabletop bell and a chorus of tiny voices shouted, " 7!"  After class, Hancock explained that her program works by teaching students mathematical patterns."  They're learning to speak a mathematical language," Hancock said.  It's a language third-grader Dania Serrato, who was in Hancock's class last year, now speaks fluently.  What's six times seven?  She counted her fingers and answered "42" in seconds. What about 50 divided by five? "Ten," she answered quickly. "If you start easy, you can learn how to do it," Dania said.  "It gets easier and easier and easier." 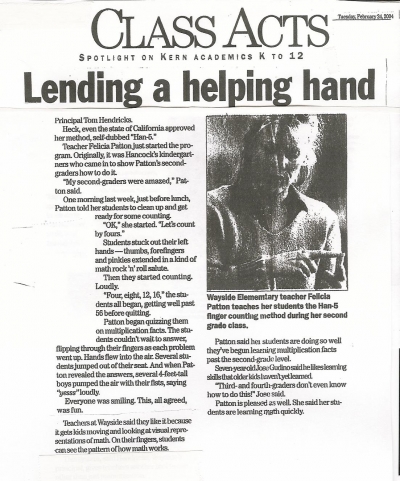